Each family in this series has a crest, or symbol for their respective house, called a sigil. Below is a list of sigils and their relation to the characters within them. 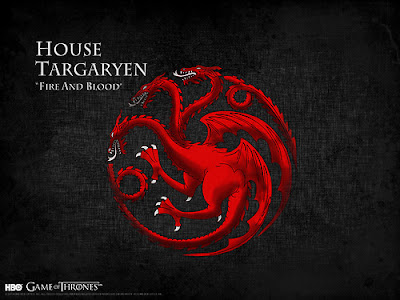 The Targaryen sigil is the most literal and rightfully so. The family motto, "Fire and Blood" is extremely fitting, because the Targaryen family are 'dragonlords' rulers of dragons who also possess their nature in their blood. This family were the rulers of Westeros before Robert Baratheon become King by conquering the iron throne. Upon this event, almost all of the family was slaughtered and the dragons died out. The Targaryen name practically diminished. The youngest child, Daenerys escaped and throughout the novels, begins to regain power in an effort to cross the sea and fight for her rightful place on the iron throne. At the same time, she brings the dragons back to life who grow alongside their 'mother.' 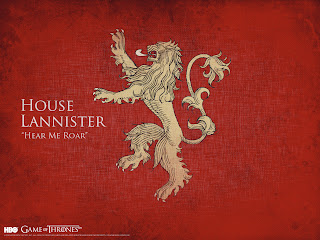 The sigil of the Lannister family is a lion. The Queen was by birth a Lannister and only upon marrying the King, Robert, became a Baratheon. The Queen's brother, Jamie, was responsible for killing the last Targaryen king. The Lannisters are powerful because they are the richest family in Westeros. Their house sigil is a lion, the 'king of the jungle'. Lions are not literally the king of the jungle, nor are Lannisters the kings of Westeros. Yet the power at their disposal, money, makes them as feared and respected as a King. 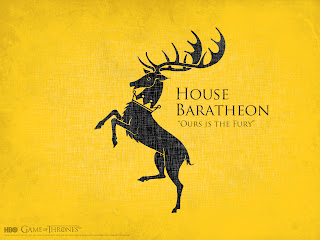 The Baratheon sigil is a stag. This family contains the King of the iron throne, Robert. The stag is by the far the most hunted animal in the forest. Throughout this series, even after Robert's death, the iron throne is hunted by various others. The desire to rule even creates a war. 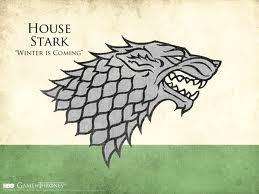 The Stark sigil is a dire wolf. Wolves are known to be social animals, traveling in packs. The Stark family is like the wolf in this way, constantly putting their family before others first in an effort to survive. Throughout the novel and show, the family becomes separated and when they do, each member can barely survive. It is only in the beginning of the novel, when they are all together, that the Stark family thrives. Another way in which the Stark family is connected to the dire wolf is that the wolf is practically extinct in the land of Westeros. Throughout the series, members of the Stark family get killed, becoming rare around Westeros themselves.